With Vietnam as a bridgehead, Kishokai intends to expand Japanese-style perinatal care horizontally to other ASEAN countries, Mongolia, and eventually, to Africa.

Since Kishokai's first visit in June, 2016, Kishokai has continued to explore the possibilities for development of cooperative projects to improve perinatal care services in Laos through discussions with Deputy Director General Dr. Bounfeng Phoummalaysith of the Laos Ministry of Health.
At the same time, discussions have continued for the possibilities of joint projects with Alliance Medical International Group, which has opened clinics in Vientiane Capital and Udon Thani Province and Nong Khai Province in neighboring northwest Thailand.

On August 1st, Kishokai CEO Dr. Mamoru Yamashita visited the Laos University of Health Sciences to meet with university president Dr. Phouthone Vangkhonevilay and vice-president Bansa Oupathana to discuss human resources for health training using e-learning.
The University of Health Sciences was established in 2007, and is the lone medical school in Laos, with over 4,500 students. Because the the university lacks learning materials, a simulation center, and demonstration machines, graduates must develop their skills in on-the-job training at their new workplace, and thus the level of care is not stable. Also many students are financially unable to get training abroad, and so the educational environment needs to be improved. The discussion covered a wide range of issues and needed support for solutions. While the construction of an e-learning system would be highly effective in the deepening of knowledge, the language barrier is one concern, and the maintenance of the Internet infrastructure must be improved.
President Vangkhonevilay commented that Laos is truly at a development stage right now, with developing the country through the reduction of maternal and neonatal mortality rates is being a major issue, and that he would like to make use of Kishokai's knowledge through human resource exchange. Kishokai would also like to proactively explore how it can contribute to the situation in Laos once it has ascertained the local needs. 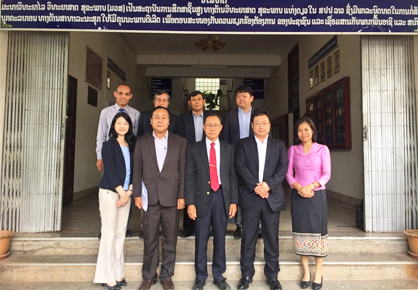 Lecture and Booth at WHO International Symposium

Over two days from June 13th to the 14th, the World Health Organization (WHO) and the Lao Ministry of Health held an International Symposium on Universal Health Coverage. Participants from Japan included the Ministry of Health, Labour & Welfare, the Japan International Cooperation Agency (JICA), and Nagoya University. From Kishokai, our CEO Dr. Mamoru Yamashita took part in a panel discussion, and lectured on the subjects of the current state of perinatal care and private medical institutions in Japan. We also had a poster session introducing the activities of each of our clinics. 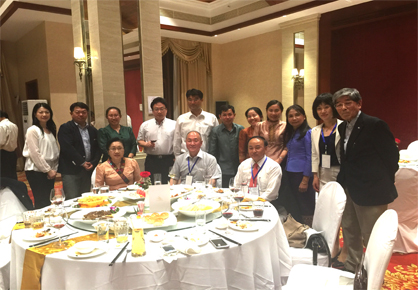 From January 27th to 30ths of 2016, our Overseas Development Division, in order to explore the possibility of project development in Laos, visited Vientiane Capital, and observed the operations of public and private hospitals such as Mahosot National Hospital, Mittaphab Hospital, and Settathirath Hospital.
Laos has a population of 6.5 million, and as a young country with an average age of 21 years old, can be expected to experience population growth and economic development in the future. However, with an infant mortality ratio of 55 per 1,000 live births, and a maternal mortality rate of 197 per 100,000 live births, both still very high levels, it is also a country facing difficult issues in maternal and child health. In order to grasp the status of health care in Laos, this visit focused on observing hospitals in the Vientiane Capital, and engaging in discussions with doctors on the front lines. Vientiane Capital is said to have a population of 800,000 people, but with cross border movement with the adjacent north region of Thailand, as well as with nearby cities Udon Thani and Nong Khai, it creates an economic sphere with a 2 million population scale, and in addition to government hospitals, large Thai hospitals are pursuing development there.
Through this visit, we feel there is a great opportunity for contribution through Japanese perinatal care. In the future we will continue to study and explore business development, as we form cooperative relationships with leading local hospitals. 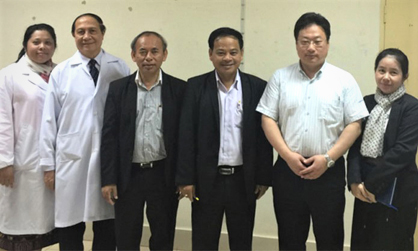